On Friday the 13th of January the cruise vessel Costa Concordia, carrying over 4,000 passengers and crew, hit a rock and subsequently encountered stability problems, whilst passing the Isle of Giglio in Tuscany. Eventually the Costa Concordia grounded and listed to approximately 56° on her starboard side. Fortunately, the majority of the passengers and crew were safely evacuated yet as it turned out later, 32 people regrettably lost their lives.

Upon becoming aware of the evacuation of the vessel, SMIT approached the owners and underwriters of the Costa Concordia in order to offer its salvage expertise and experience. SMIT decided to mobilize a team of salvage experts and critical, portable salvage equipment immediately and on speculation; this in order to prevent wasting valuable mobilization time during the contract negotiations.

In the days following the accident, a contract was awarded to SMIT Salvage and its longstanding Italian salvage partners Tito Neri S.rl. for the removal of bunker oil, provision of pollution control and to clean up debris emanating from the vessel. The estimated amount of bunkers in the vessel was 2,200Mt of intermediate fuel oil, 185Mt of marine gas oil/diesel and lubricants, distributed over 17 tanks. Whilst the mobilization of further specialist equipment (hot tap, heating equipment, dive equipment, etc.) proceeded, a crane barge from Livorno was prepared for working alongside the vessel.

The salvage master and his team – mounting up to approximately 60 employees from Neri and SMIT – continued to prepare (diving inspections, installing valves etc.) for the recovery of pollutants and to obtain the required permits for this operation with the various maritime and local authorities. A pollution control plan was drafted and approved by the authorities and no less than 2,000 meters of offshore oil booms were deployed around the vessel and the various beaches of Giglio Island. In addition, a small flotilla of oil recovery vessels was on stand-by in close vicinity of the vessel.

After four weeks of preparatory works, permitting and awaiting a favorable weather window, the Salvage Team commenced the oil recovery operation, which went very smoothly. The oils were transferred to an oil reception recovery vessel. Works were completed on March the 24th but SMIT also concluded a caretaking contract while the wreck removal bid tenders were being considered. SMIT eventually demobilized the team on June the 26th. An unprecedented and heartfelt send-off by the local authorities, stakeholders and community was held in honor of SMIT’s successful work and cooperative spirit 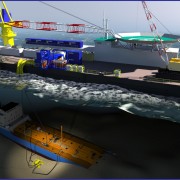 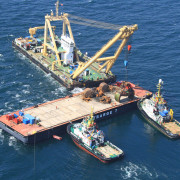 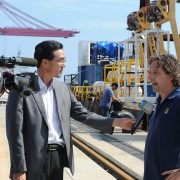 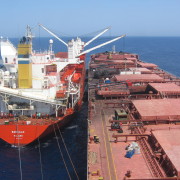